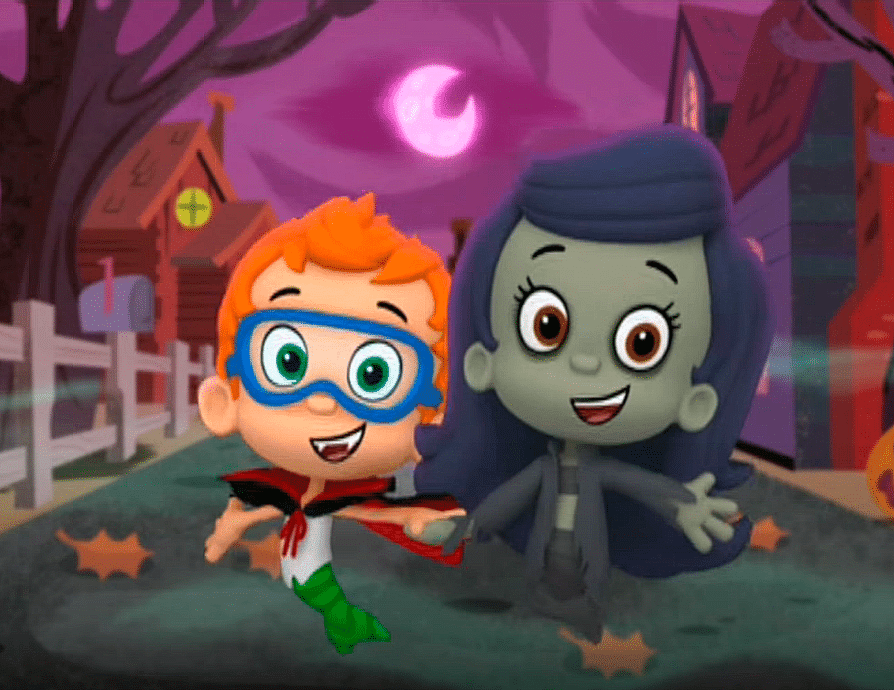 It`s creepy, and you think the house is creepy?
Yeah, it`s like a haunted house.
I wonder if it`s haunted.
There`s no such thing as ghosts. It`s all fiction.
Puppy, come on, you scared me!
Hey, you`re not a ghost, not a ghost.
What`s all this creepy stuff for?
It`s a decoration for tonight`s party.
You`re having a party in a haunted house?
It`s gonna be really creepy. That`s our hi.
Hi helps me with the decorations.
Rubber bats, scary spiders and glowing pumpkins.
And we need to get this party ready in time.
We`re waiting for you tonight and don`t forget to dress up in creepy costumes!

Good morning, kids. What was that?
Very creepy, we saw a creepy house.
Yeah, and there`s gonna be a party at this creepy haunted house tonight.
But there`s no such thing as a haunted kid.
But pretending to be them is fun and creepy.
Have you ever been to a haunted house, mister?
Of course I`ve been to a haunted house. And what was there?
Well, let`s think about it. It was a dark and creepy night.
There was a haunted house on the hill.
I went up to the house and opened a big squeaky door.
And when I went inside, the lights went out.
And so it was very scary.
It was very dark there, and then in the dark,
I saw a big orange pumpkin.
Until you carved a creepy face on it,
And you can`t call it a wandering light.
The roar of his witch in the middle of the night is creepy.
And his zombies come into the world.
Let`s go before he shows up in the blink of an eye.
And the mummies came to life and went on the ground and werewolves.
Tea and old-timers run from the meat but they`re afraid.
What time is it that I have a huge sandwich.
Tomato salads, why are you a werewolf?
I have a tomato and cheese.
What about you, a vampire?
It`s a witch brother who`s fun to decorate everything.
This cobweb thing looks creepy.
It`s a rubber giant bat.
It`s a very creepy moly.
Look at mine scared.
You have to think of something scarier to scare me.
What about that vampire?
What vampire?
The one behind you.
Thank you so much for being the vampire of the party.
In a haunted house.
They don`t know who you`re gonna be.
What do you think I`ll be?
That`s a good idea, a ghost suit.
It`s what you need for the party.
Let`s think about what kind of costumes
Wear to a party at a haunted house.
You can just put it on your head and be like...
Whoo! That`s creepy!
Or you could wear a wide-brimmed hood and...
To be a witch at a party.
And if you talk with an accent and put on
A long black cape, it`ll work.
A vampire can still dress like a zombie.
Zombies are very scary monsters.
Zombies are a terrible monster.
Such a big creepy shadow, we have to get out of here.
Try to hide here.
There`s something creepy chasing me. I need a number,
To hide a creepy thing I don`t know,
But his shadow is terrible.
Yeah, I can`t hear anything, maybe she`s gone.
Something`s raging. If you want.
To be very creepy, you have to dress up like a suit.
I dressed like a witch.
You have a great costume.
My friends, it`s time we went to the haunted house.
Let`s go. Wow, what a creepy house!
Good evening ahead. Hi.
I`m glad you guys came, please come to the haunted house.
It`s kind of creepy in here. You bet I`m asking you to come this way.
Good evening, I have some bad news for you.
I can`t find the main ingredient for a terrible potion.
There`s a very scary pumpkin somewhere in this house.
But I don`t know where we can help find it.
Are you sure? It`s very creepy in here.
Then go and find a very scary pumpkin.
Bring it to me and then the party will finally begin.
Let`s go find a scary pumpkin somewhere upstairs.
Look at all these pumpkins.
At night we found them and we have to find a really scary pumpkin or the party won`t start.
Tell me, which one of these pumpkins is the scariest?
This gourd is really the creepiest.
Thank you for your help.
Come on, it`s time to get out of here.
Here`s what we found. Oh, that`s a great liquor for a woman.
The ghost I saw, everybody come to me.
Gaby found a scary pumpkin, so let our creepy party begin.
Wearing a black suit and wide-brimmed hats.
I honestly only eat ghosts in fairy tales.
Well, then who is? I think I know who this ghost is.
Do you know who`s under the sheet?
Who`s under there?
A puppy, a ghost puppy.
It`s a relief to be afraid.
Yeah, you guys, it`s a creepy party!
Yeah, it`s really creepy!
I thought the puppy was a real ghost.
Buddy, you know that there are no real ghosts,
It`s all fiction. Molly, turn around!

It’s scary to think that even a children’s cartoon can contain suggestion techniques. However, it is. A huge amount of content aimed at the young viewer, specially filled with hypnotic images and verbal turns, with the aim not only to attract the attention of the child, but also to “sit down” him on the need to watch more.

In this example, all Leegle indicators are at maximum. The main emotion is Fear, which is predictable. The subject matter of the series (Halloween) allows the natural use of words of a frightening semantic series, while the set of images is narrow so that there are as many repetitions as possible.

Such “horror” acts critically on children’s psyche. It is worth keeping a close eye on the content of audiovisual works produced by a child.