The level of psychological pressure in the Egyptian “Book of the Dead”. A chapter on how the body of the deceased enters a monastery on the day of the funeral rite.

The level of psychological pressure in the Egyptian “Book of the Dead”. A chapter on how the body of the deceased enters a monastery on the day of the funeral rite. 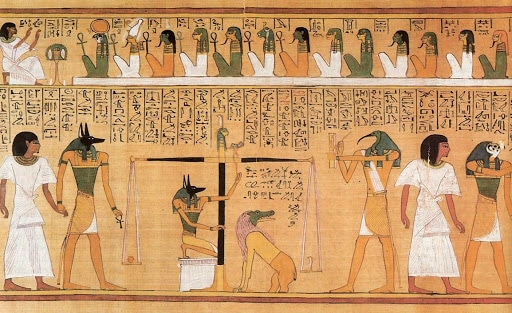 Worshiping you, oh, you, who dwell in the holy hill of the West (Amente), Osiris, the royal scribe Nekht Amun, whose word is true, knows you, he knows your name. You take him from the worms that are in Resetev, who live on the bodies of husbands and wives and feed them with blood, to Osiris, the beloved servant of the god of this city, the royal scribe Nakht Amun, you know, and he knows your name. Let the order for his protection be the first order of Osiris, the ruler of the extreme limit, who keeps his body hidden. Let him give him a leave of absence from the Horrible One who dwells at the bend of the Western River, and let him point out the acts that will raise him. Let him go to the one whose throne is in darkness, who gives light in the Land of Ra. Oh, you, Lord of Light, you come and consume the worms that are in the West. May the Great God who dwells in Busiris, and who is not visible by himself, hear his prayers, and may those who bring calamities hold him in fear while he advances with the sentence of their afterlife judgment to the divine dwelling place. I am Osiris, the king`s scribe, Naktu-Aman, come bearing the order of Nibar-tar, and I am the Mountain who takes possession of his throne for him. His father, ruler of all those who are in the castle of his father the Mountain, ascribe praise to him. He is coming, bringing news... Let him see the city of Heliopolis. Their leader will stand on the ground before him, scribes will glorify him at the gates of their meetings, and your men will swaddle him with bandages in Heliopolis. He is the leader of the captive heavens, and he has grabbed the earth with his grip. Neither heaven nor earth can be taken from him, for he is Ra, the firstborn of the gods. His mother will nurse him and give him her breast on the horizon. The words of this chapter are to be spoken after the dead are put at rest at Ament; with their help Tennth will be satisfied with his master. And the departed, whose words are truth, shall come forward, and he shall come aboard Ra`s rook, and his body shall be accounted for on the funeral yeast, and he shall be set up in the abode.

The Egyptian “Book of the Dead”, like many similar religious treatises, under the guise of “necessary” instructions to the dead, gives badly bound gibberish. These texts are a good excuse to pass on programming images to the listener, and as a result, to unbalance the psyche. “Horror, fear, prayer, heaven, god, rook” – images that strongly influence the subconscious. What the “priests” still use to this day.